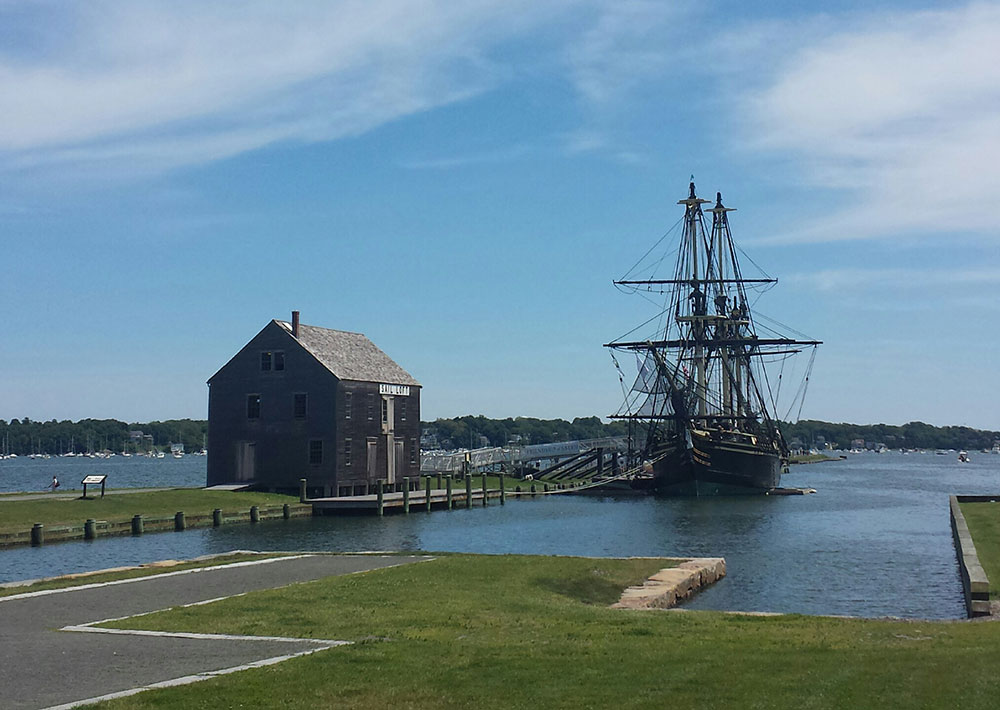 If I could be a fly on a historic wall, I’d go back to the meeting house in Salem, Massachusetts when Sarah Towne Cloyce was tried for witchcraft in 1692. I recently discovered that I’m distantly related to her.

I’m also related through marriage to Thomas Fiske, the foreman of the jury that condemned at least one accused witch, maybe more. So I had distant Dodge relatives on both sides of this crisis in history. What I really want to discover is what position my direct ancestors—the family of Richard Dodge—took on the witchcraft issue.

So I dug into online archives, hoping for a diary or letter or some other juicy source. I emerged empty-handed. Thus, I decided if I couldn’t uncover a detailed history of my family at this moment in the past, I’d write their story myself.

That is how my current fictional work-in-progress began. Tentatively titled The Tale of a Hunter, my story is a Romeo and Juliet tragedy set in Wenham, Massachusetts in 1692. More on that story as it develops.

If you’re interested in writing historical fiction, understand that you’ll have to do lots of historical research. Here is a review of a nonfiction book for teen readers all about the Salem witchcraft hysteria. 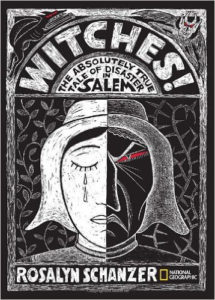 Rosalyn Schanzer’s Witches: The Absolutely True Tale of Disaster in Salem has the feel of a forbidden piece of literature. The book is small and thin, the cover a scratch-board image of a woman’s face.

The left side features a girl wearing a white coif on her head and white tears run down her white face. The right half is a black hag who scowls at the reader through her one blood-red eye.

This is a history book that demands to be opened.

Inside more scratch-board drawings of accused witches and their accusers set the stage for what happened in Salem, Massachusetts in 1692. A brief preface poses rhetorical questions about how people explained the unexplainable in colonial America. This preface is general but it defines the subject—witches—and establishes the eerie tone of the book.

This historical drama opens in the home of Salem Village’s minister, Samuel Parris. It is January1692 and the Parris family is struggling. The winter is bitterly cold. Church officials are slow to deliver Parris’s pay and his monthly allotment of firewood. Worse, his nine-year-old daughter and 11-year-old niece are afflicted with a mysterious ailment.

The girls convulse and bark and claim they’re being pinched and choked. When the local doctor pronounces them bewitched, it isn’t long before more teenage girls become “afflicted.” Pressured to reveal who is hurting them, the girls accuse three local women. So begins the frenzy now known as the Salem witchcraft hysteria. Before the year is out, more than 200 people will be accused of witchcraft and 20 will be executed.

Schanzer recounts these events in a narrative that is concise, chronological, and suspenseful without straying from the historical truth. She peppers her account with actual dialogue drawn from court documents. These excerpts support Schanzer’s historical claims and add tension to the story. Dialogue between magistrates and the accused reveal the court’s bias from the outset as can be seen in this exchange.

Magistrate John Hathorn demanded of Sarah Good, one of the first women to be accused of witchcraft, “What evil spirit is your familiar?”

Hathorn was having none of it. “Why do you hurt these poor children?”

“I do not hurt them,” Good retorted.

“Then what creature do you employ to hurt them?” Hathorn asked.

Today such questions would be thrown out as leading, but in 1692 they were standard operating procedure.

The bold language and fast-paced narrative will hold the interest of young readers.

Who can resist turning the page when Schanzer describes the Devil and “his brutes” as “fiend(s) to the bone” and “foul-smelling souls of the dead, horrid imps of darkness…” However, I found myself wanting Schanzer to slow down and interpret more. She suggests potential causes of the witchcraft hysteria, but takes the easy road by claiming in one brief paragraph, “It seems likely that several of these theories are correct…” Schanzer has taken on the mantle of historian whether she identifies herself as one or not. As such, she owes her readers more than a recounting of facts, regardless of how riveting the narrative.

A writer of history should also analyze and interpret the past in order to help readers extract meaning from these events. Despite this criticism, Witches! is well-written, solidly researched, and sure to hold the interest of anyone intrigued by colonial America’s foray on the dark side.

Have you read this book? What did you think?

Any suggestions for nonfiction books for young readers about the Salem witch trials or other similar events?

Review of Getting Away with Murder: The True Story of the Emmett Till Case
Scroll to top