Is history a noun or a verb? How a teacher answers this question can be seen in what goes on in his or her classroom.  If you want to develop the minds of youth who are capable of thinking critically about the relationship between the past and the present, then don’t teach history to students. Instead teach students to do history.

According to the Entomological Dictionary, the Latin word historia means a “narrative of past events, account, tale, or story.” In other words, history is a noun.

During my first several years as a teacher, my perception of history as a noun shaped how I taught. I was a story teller, regaling my young listeners with tales of the people, places, and ideas of the past. Sometimes my stories entertained the students and sometimes I put the kids to sleep. But I was always the narrator, the only person in the classroom actually doing history. I selected the sources for my students to read, and I decided which facts were important. The kids opened their mouths and I spooned in my interpretation of the past.

But time, experience, and graduate school eventually led me to rethink the meaning of history. The Greek word for history is ἱστορίa, “learning or knowing by inquiry.” Defined as such, history is not a noun but a verb.

Defining history as a verb transformed my teaching. Memorization was tossed out and problem solving was brought in. I spent much more time teaching critical thinking skills than I did historical content. My goal was for each student to build a tool kit of abilities so they could think like historians. With this tool kit students could question, analyze, summarize, synthesize, infer, evaluate, and interpret. 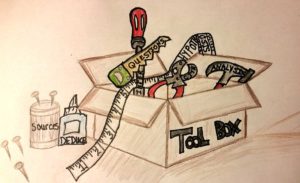 When you teach history as a verb rather than a noun, learning is messy and nonlinear. My students pursued their own interests within the curriculum and proceeded at frustratingly different paces. Some kids struggled to summarize a single primary source while others could synthesize multiple sources into a coherent argument. Despite these challenges, I would never return to the days when I taught history as a noun.

Equipped with their tool kits, my students learned to evaluate and analyze sources. They formed their own interpretations of the past and felt confident to challenge each other’s conclusions. Some of my most gratifying moments as a teacher came when I heard students ask each other, “What evidence do you have for that argument.” That is what doing history sounds like.

In subsequent posts, I’ll share ideas for how to help students build a tool kit of critical thinking skills. Next time, look for an activity that teaches kids how to analyze a primary source while also giving them a peek inside the soul of their teacher.

Teaching School Desegregation through the Story of Sylvia Mendez

Teach Students how to Analyze Sources and Give Them a Peek inside their Teacher’s...
Scroll to top